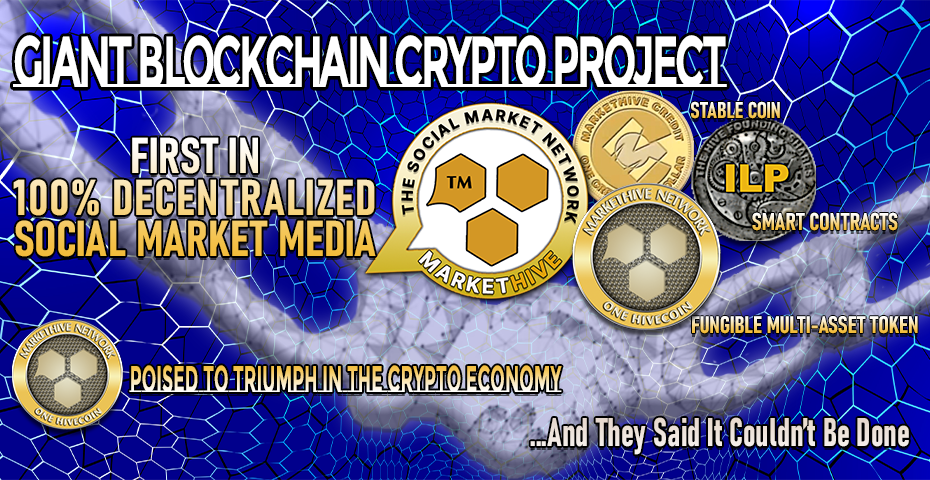 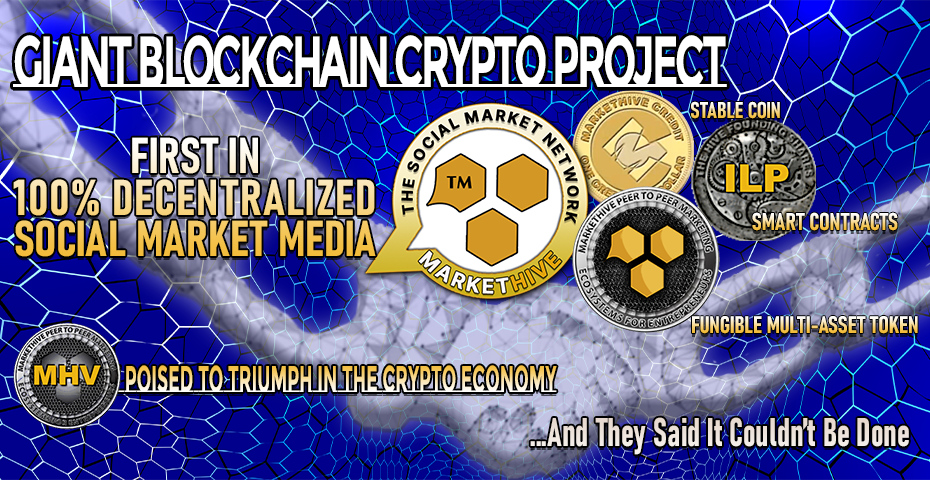 …And They Said It Couldn’t Be Done

MHV poised to triumph in the crypto economy.

Cryptocurrencies have many use cases. Some act as a store of value, others power blockchain to make it possible to create trustless digital contracts and permissionless decentralized applications. Some cryptocurrencies are pegged to fiat currency allowing for stable transfers of value, and some underpin protocols that offer decentralized data storage and video streaming.

Each of these use cases requires a particular set of blockchain attributes and economic incentives. Many say that there is no single cryptocurrency project that can do it all; however, there is one that comes very close in a field that has been, for the most part, put in the too-hard basket by the majority. 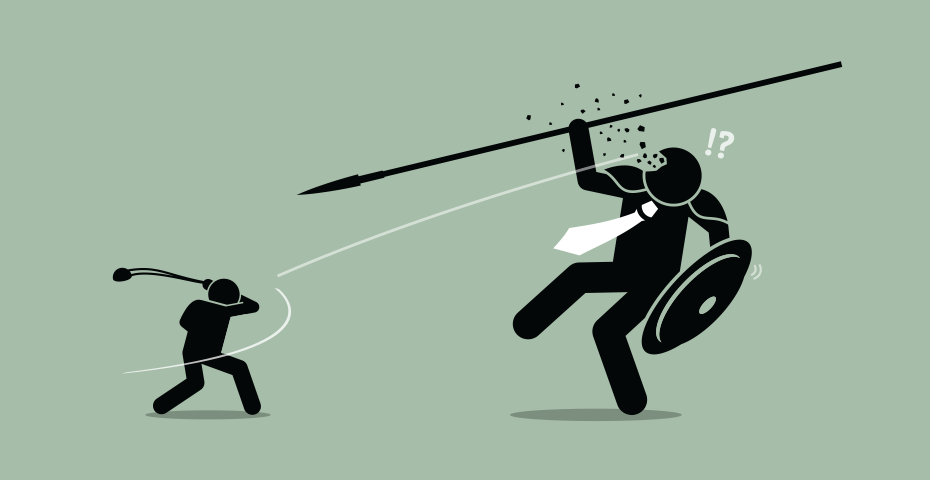 Markethive is a monolithic blockchain project currently operating as a social network, an entire inbound marketing platform with email, blogging, and digital media capabilities that broadcast to the vast internet. It’s a complete Market Network and the first of its kind.

Markethive is predominantly a free system where users can access a platform that can cost more than $2,500 offered by other marketing platforms. There are, of course, upgrades that open up more tools and monetization opportunities, the first being the Entrepreneur One Loyalty Program, and coming soon is the Apprentice membership.

The many domains Markethive has, and it's autonomous cloud systems that ensure its sovereignty and longevity make it untouchable and immune from the tech giants’ rule and biased agender. But can still remotely infiltrate the social media platforms and reach the multitudes either locked in or looking for an alternative meritocratic medium.

In other words, wherever you go, Markethive is there, anywhere and everywhere, delivering its message via its community of entrepreneurs to a far-reaching audience. This next-generation social market media is poised in the wings, and when the time is right, it will emerge as a shining light to lift people up and bring financial sovereignty and hope in this gloomy and uncertain world.

The video platform, conference rooms, and the unique four specific news feeds currently in development, and many other projects and incentives add to the credibility and need for an ecosystem in the social media and digital marketing space.

Now in the final stages of BETA, Markethive will officially launch with the release of its first crypto exchange wallet, which is basically a portal to the many coin exchanges MHV will be listed on, and is close at hand. (Not to be confused with our Dapp multi-functional wallet in development).

Meanwhile, the growing user base is accumulating their Markethive Coins (MHV) in anticipation of the release when they will be able to transact using MHV within the Markethive system and externally.

The Markethive platform enables the users to earn MHV cryptocurrency with everything they do on the platform and are also paid for their loyalty. The Vault is an innovative concept that allows Markethive members to stake their coins, similar to a bank account. The more coins held in your vault the higher the micropayments received, and then there’s the monthly interest paid to you based on the number of coins in your coin clip.

The company issues these micropayments, incentives, and rewards, not just the users, which is commonplace and the only form of payment in other crypto-based platforms. However, Markethive does have a tipping protocol the people can utilize if they wish and substitutes the like button.

It isn’t only a social media network or inbound marketing platform; it lends itself to the cottage industry concept allowing members to monetize the various initiatives Markethive is developing, starting the Banner Impressions Exchange. It’s also where entrepreneurs can facilitate and promote their personal businesses to a built-in audience as well as a springboard to the far regions of the internet.

In Markethive’s all-encompassing ecosystem, the objective for the Markethive Coin (MHV) is to be utilized as a form of payment rather than just selling it (pump and dump scenario). This gives a purpose and real use case for MHV, equalizing the velocity, and increasing coin value.

Bitcoin has established itself as a store of value that affects the value of most other altcoins, albeit positively or negatively at any given time. However, if a coin or project’s use case and utility are credible, it can result in a parabolic shift, increasing in price, without riding on Bitcoin’s coattails. 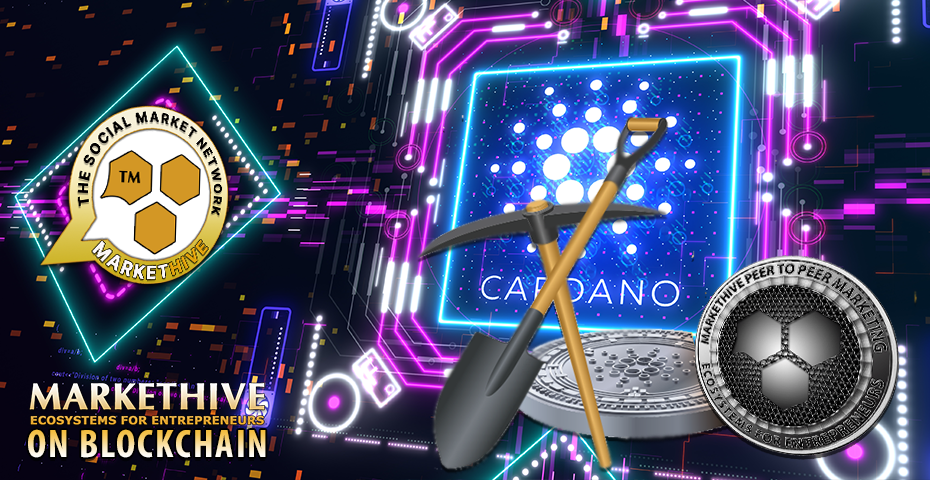 The Markethive Blockchain On Cardano Platform

Recently, Markethive decided to migrate to the Cardano Blockchain platform from the Ethereum platform for several reasons explained in the article.

The Cardano blockchain platform enables Markethive the advanced capabilities to produce the distributed database system that Markethive needs to ensure all data that the extensive user base inherently creates in a social media environment are safely integrated and stored on the blockchain. This includes all forms of content, videos, images, etc.

A mammoth task for a blockchain, and also not conducive for an established social media platform like Facebook with its trillions upon trillions of data already in its system. Markethive conceived and initiated this blockchain protocol from the ground up making it easier to integrate. We just had to wait for the right technology to surface.

Thanks to technology evolution, the Markethive social market network’s ability to build a massive database management blockchain can only be done on a 3rd generation blockchain platform like Cardano. Fundamentally, the Markethive blockchain will be forked off the Cardano blockchain, with MHV being a native token which is a fungible multi-asset token.

Native tokens represent value and act as an accounting unit, which can be used for payments and transactions and sent to an exchange address. Native means that these tokens are supported by the Cardano accounting ledger without the need for additional smart contracts, as the ledger features built-in support to track ownership and transfer of more than one type of asset. 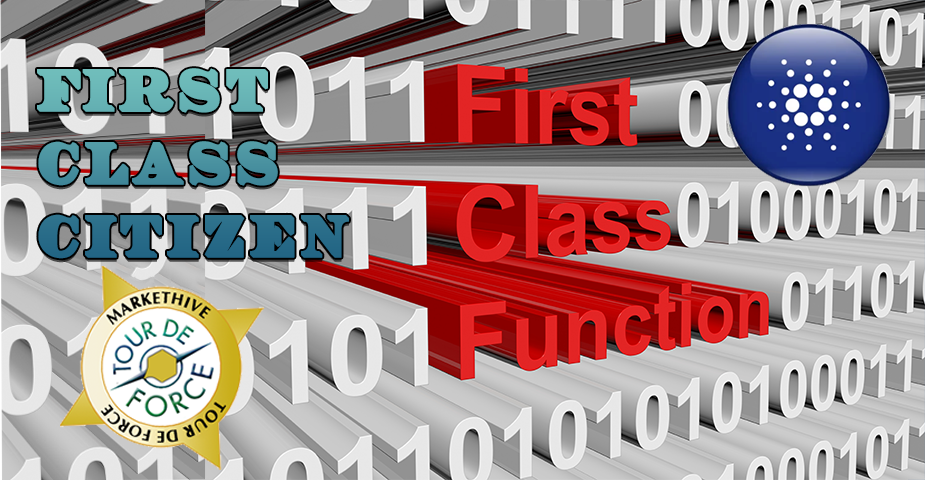 The Markethive Coin – A First-Class Citizen

Cardano’s Mary Hard Fork, conducted on March 1st, 2021, saw the introduction of native assets to the Cardano Blockchain. This means MHV can be built into the blockchain ledger the same way Cardano’s native token, ADA, makes MHV a first-class citizen.

In other words, MHV will receive the full benefits of the Cardano blockchain, such as the same level of safety and security as ADA itself and eventually a governance system as it rolls out.

The first-class citizen approach will mean Cardano’s multi-currency ledger will give much more autonomy to any token(s) made on the blockchain. They won’t be another cookie-cutter token like the ERC-20 token.

This design will make it easier for tokens built on Cardano to be listed on exchanges as they will be able to prove a greater degree of independence than ERC-20 tokens.

The protocol also allows multiple native assets within the same transaction, unlike Ethereum, where it is only possible to send one ERC-20 token at a time. You will also be able to use native assets to pay transaction fees made possible by the recently announced Babel Fees mechanism currently in development. By contrast, you need ETH to send any ERC-20 tokens on Ethereum.

Ethereum blockchain issues tokens through a custom coded smart contract, which issues a non-native token. This token won't have all the advantages of Ethereum, and you have to pay for smart contract execution every time you move your token. This is why people complain about Ethereum fees being so high. It's not very efficient, leaving the door open for human error when coding smart contracts.

The low cost in transactional fees and the increased throughput into the thousands make Cardano blockchain a favorite in future generation blockchains. A sustainable, scalable financial operating system is becoming a reality.

MHV Remains The Same As It Ever Was

It’s important to understand that the Markethive coin remains the same and will not affect any current or future operations of the Markethive system. You still keep your MHV coins you are accumulating. It's the blockchain technology behind Markethive that is changing for the better.

The ILP smart contracts that some entrepreneurs in Markethive have recognized the value of and acquired will work seamlessly in the background on the Markethive blockchain forked off Cardano, all the while the MHV will be used as a medium of exchange and will continually be circulating, earned and accumulated by users within the Markethive economy. 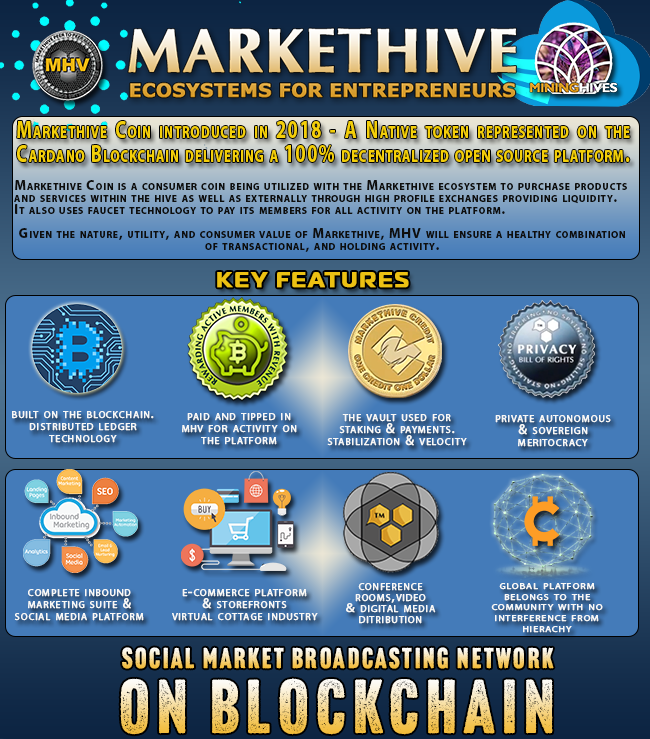 This is a very advanced technology Markethive is integrating at which no other platform is doing or will attempt to do. It is a vast undertaking and needs to be done right so security is not compromised, on all levels, hence the methodical and time-consuming approach. Markethive is incomparable to any other media platform and although touted it that couldn’t be done, is, in fact, 90% done.

It’s about looking after the community, the products and projects, the use, and the utility. Getting it right, being clever and evolutionary will pay huge dividends in the mid to long term for everyone in the ecosystem. Markethive is always focused on where we are going and why we are going there in the mission, giving economic sovereignty and identity to all, especially those that don’t have it.

I know, it’s hard to get your head around and most people don’t comprehend what we have in our midst with Markethive but rest assured this gigantic all-in-one platform current flying under the radar will be a life-changing positive force of how we work, earn and socialize online.